Sangamon House
The Army Champs operation began as a gleam in the eye of General William Westmoreland, who sometime in the winter of 1969, a few months after being relieved of command of the armed forces in Vietnam, had seen the game of European handball played, probably in the Frankfurt area of Germany, where American army bases abounded.  He returned to the States with a vision of this game which required serious, hand-to-hand combat skills, as the sport of the future for the Army, something that would both emphasize a distinct athletic culture and offer the world a more sympathetic view of American soldiers.  1969 was the year of Woodstock, the Manson Family and hundreds of anti-war protests, the counterculture at the height of its influence.  A program that would promote this newly-designated Olympic sport, complete with smiling Army faces marching into the Opening Ceremony, would do much to counteract the public view of soldiers as war mongers and misfits.  He made contact with the U.S. Olympic Committee and soon a meeting was arranged at the Pentagon between Westmoreland and Peter Buehning, the president of the United States Team Handball Federation, the national governing body for the sport in America, and the man responsible for fielding the Olympic qualifying team.   As the war raged in Southeast Asia, as protests erupted in cities and campuses all over the country, Army athletes were auditioned and selected, soon to be trained in a sport few of them had ever even heard of, let alone played.  Those who failed to make the team were sent home, most probably to serve in Vietnam.  The eventual sixteen who made the final team and qualified for the 1972 Olympics, went on to become the talk of the competition, eventually beating Spain, a top ten international power.

Army Champs:  Brothers with Arms is a proposed feature documentary film, the tale of a group of GIs, mainly, who stumble onto a sport that would not only be their ticket away from Vietnam but would as well give birth to the sudden dream of Olympic glory.  The first half of the story focuses on the Army Champs program, commissioned by General William Westmoreland, and the slow gathering of athletic talent, leading to trips to Europe as they learn to play a very strange game.  It is, at first, a difficult assignment, as a bunch of former collegiate athletes learn how to lose for the first time in their lives, but it culminates with their victory over Canada for the right to go to the Games.  The second half of the story follows the team as the reality of Olympic competition, playing against the best in the world, confronts them.  Each game of their Olympic competition will be examined, with special analysis of their game against Spain that produced such an unlikely victory, still the greatest win In American team handball history. 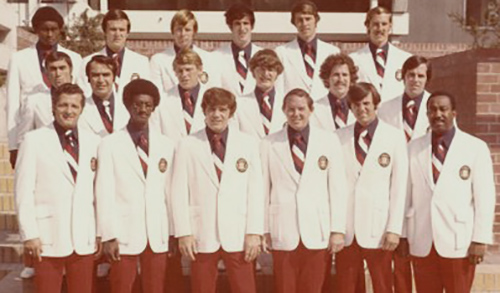 The Official Picture of the 1972 USA Olympic Team Handball Team

This Is Team Handball
Learn more about this Olympic sport that is played all over the world.

In January of 1977, Mark walked on to a hand-taped team handball court in the Women’s Gym at UCLA, a wide-eyed beginner. He had seen a sign seeking athletes to join the team handball club team that had formed there and, still working on campus after graduating five years earlier, he started showing up to Wednesday night practices.  He was instantly intrigued with this sport, an import from Europe that combined all the things he loved about sports -  throwing, catching and improvisational ball movement, with contact thrown in.  He traveled with the team to White Fish Bay, Wisconsin, for his first Nationals, the event that attracts the best team handball clubs across America, as part of the UCLA team that finished fifth.  He was hooked.

Five months later, he stepped onto a team handball court in Edmonton, Alberta, playing for the US National Team against Canada for the right to go to the World Cup in 1978.  Eventually, he moved to Colorado Springs where he trained with the team for the 1980 Olympics in Moscow, becoming a three-year starter and one of the captains of the team.  Later, he was to claim three national titles as a member of the famed club team, the Sushi Masters.  He retired in 1995 after winning his last national title in Atlanta.
​Along with playing, Mark has supported the sport through media productions and public relations efforts:

• he served as chairman of the public relations committee for the US Team Handball Federation,
the sport’s national governing body at the time.

• produced both the game and the 60-minute television vehicle of the 1996 game known as “The Last Waltz,"
which pitted the Sushi Masters against the reigning Finnish national champion, Diken.

Army Champs is Mark's tribute
​to the sport of team handball.